By STG September 29, 2015
When the automobile moguls at Toyota Motor Corporation decided that they wanted to produce a prototype for a car seat that was as lightweight as possible, they found themselves face to face with a complex project that was meant to be handled by 3D printing technology. How would the Toyota team possibly design, build, and manufacture such a complex and sizable 3D printed car seat? That’s where Belgium-based 3D printing service bureau and software developer Materialise and their enthusiastic engineering team came in.

Using a specialized method of topology optimization, Toyota and Materialise were able to assign various levels of density to the car seat design before transforming it into a 3D model. The lower density areas were then populated in Materialise’s 3-maticSTL software, which allowed for design modification, repair, and simplification of the car seat’s 3D files. The 3-maticSTL method was also utilized to remove unnecessary print material and add comfort to the seat through the placement of a pattern of elastic beams to the surface of the prototype.

The design itself is filled with so many complex patterns and unit cells that Materialise had to use their slice-based operations technology, which allows designers to apply texture and structure to gigantic, unmanageable STL files. Materialise’s procedure works by skipping over the general STL file stage of design and directly builds the geometric patterns onto the 3D slices, creating a large-scale model that would have been impossible to design without their innovative slice-based operations process. 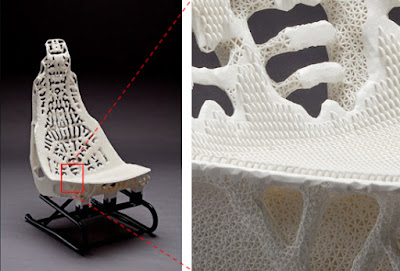 The efforts of Toyota would have also been fruitless without the use of Materialise’s Build Processor, which works to simplify the 3D printing process by reestablishing large files into a much more manageable size. In the instance of the lightweight car seat prototype, the Build Processor cut the file size down from 250GB to just 36MB of metadata. Finally, the stage of rapid prototyping was performed by Materialise’s laser sintering technique, a manufacturing process geared towards producing a large amount of components in one shot, which is exactly what Toyota needed to create the large-scale prototype of their lightweight car seat. 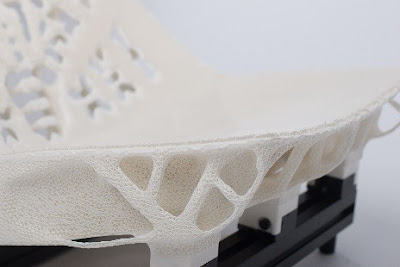 Despite it’s size, the 3D printed prototype weighed just a staggering 7kg, and also reduced the heat capacity of the car seat from the standard 35.4 J/K (joule per kelvin) to just 14.5 J/K. With a big helping hand from Materialise’s engineers, Toyota was able to manufacture a car seat with a low volume that would have been unfathomable without the 3D printing process advancements implemented by Materialise. Their software and technology, combined with Toyota’s ambition to create the lightweight car seat prototype, is pointing the automobile industry in the direction of additive manufacturing, which as we can now see, can allow companies like Toyota to create complex prototypes that would have been impossible to design or manufacture without 3D printing innovators such as the Materialise team.