Stratasys Direct Manufacturing teamed with Structural Integrity Engineering to further efforts on the latest Flying Eye Hospital for Orbis. Orbis, an organization dedicated to providing ophthalmic training to communities around the world, utilizes airborne training facilities called Flying Eye Hospitals. Orbis’s goal is to eliminate unnecessary blindness, of which 39 million people around the global suffer from needlessly. In order to heal blindness, the Orbis team performs eye surgeries and educates doctors in the proper execution of eye surgeries through two-way audio-visual links. To aid and instruct as many people as possible, Orbis’ entire hospital and training facility is housed on a converted MD-10 aircraft. To further their efforts, Orbis began the process of building a new airborne hospital by reaching out to Structural Integrity Engineering, who then sought out Stratasys Direct Manufacturing for help manufacturing an air duct.

Structural Integrity Engineering (SIE) is an aerospace company that re-designs, re-builds and re-claims old and unused aircraft. One of the more complex components needed for new Flying Eye Hospital project was an air duct required to conform to certain curvatures as well as meet all FAA requirements for airflow. Its purpose is to filter air between the cockpit and the operating rooms. SIE chose to use a 3D Printing process to produce the air duct.

Mark Curran, Senior Engineer at SIE, has been working with additive manufacturing (3D Printing) processes for years, but always as a way to prototype and test out new parts using Stereolithography (SL). During design and form and fit testing, Curran and his team realized that traditional methods of manufacturing ducts would not be ideal for the geometry of the air duct needed on the Orbis plane. 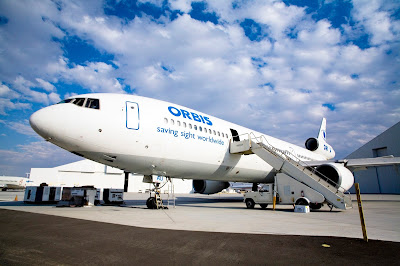 ULTEM is a thermoplastic material that has been engineered to meet very harsh environments, which is why the material has become widely used in the production of large vehicles such as automotives, industrial equipment and aircraft. “We took what we normally would’ve done in fiberglass and shifted our approach,” says Curran. Instead of fiberglass, Curran and his team chose to use 3D Printing process Fused Deposition Modeling (FDM)coupled with the tan ULTEM material that worked so well for the team during testing. “We were able to design mounting feature attachment fittings into the actual part. The mounting features are usually separate. By designing them into the FDM ULTEM component, we were able to reduce our overall part count, which is always a good thing.” The success of the 3D Printed material and the ability of the process to consolidate parts was met with a lot of enthusiasm from Curran’s team. 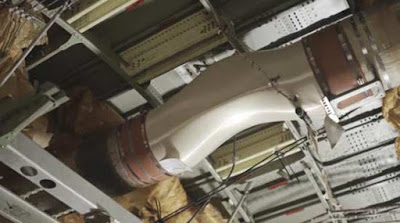 FDM is an additive manufacturing process and works similar to a hot glue gun, extruding thermoplastics varying in degrees of durability, layer by layer, until a final product is achieved. The process, as Curran explained, allows for multiple features to be built into the actual completed product, opening up possibilities for designers to program-in virtually any feature they require. Had Curran and his team manufactured the duct using fiberglass, the machined mold and lay-up process would have taken weeks; with FDM, the team was able to receive their part in a matter of days, and should they need a replacement or an extra part, the team could receive multiple parts in just a few days.

An earlier prototype of the air duct has been awarded a place in the National Additive Manufacturing Innovation Institute (NAMII) in Washington, D.C., to display the capabilities of 3D Printing and transfer those visionary and realistic ideas to the mainstream U.S. manufacturing sector.

Jack Mc Hal, MD 10 Program Director of Orbis International, commented that their objective “is to build the most sophisticated, technologically advanced, state of the art, gold standard hospital platform”; Stratasys Direct Manufacturing’s additive manufacturing was able to meet those standards.