By STG September 29, 2015
A 3D-printed windpipe has been used to practise delicate surgery before an operation on a six-year-old girl at London's Great Ormond Street Hospital. 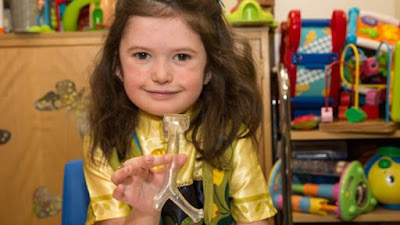 It meant doctors could pick the correct tools needed to wash her lungs.

And as a result, Katie Parke, from Northern Ireland, needed to spend less time under anaesthetic and being ventilated.

Doctors at the hospital say the technology could also be used to train other doctors.

Katie has pulmonary alveolar proteinosis, which means grainy deposits build up in the microscopic air sacs in her lungs making it hard to breathe.

Regularly washing the lungs with saltwater is the only way to remove the deposits.

During Katie's operation one of her lungs needed to be ventilated while the other was cleaned.

The team at Great Ormond Street Hospital used a CT scan of Katie to print out a 3D rubber model of Katie's trachea. They could then select the tools they needed ahead of the operation.

Katie's mum, Sharon Parke, said: "It's amazing to see what a tiny bit of kit can do. Katie's had brilliant treatment at Great Ormond Street and now she can even go horseriding, which was unthinkable before."

Owen Arthurs, a consultant radiologist who organised the study said: "We can look at a 3D reconstruction on a computer, but this takes it into a whole new dimension.

"Being able to hold it in your hand makes the procedure much easier and safer."

Doctors at Boston Children's Hospital, in the US, have also tried printing models of part of the brain ahead of surgery.

Dr Arthurs added: "It could also be used to make training better, being able to print a part of the anatomy is quite powerful. It's really important to train the next generation of doctors and make them better."