By STG June 29, 2015
3D printer users are thinking big — really big — and taking on large, complex builds that point the way to a future of custom, printed vehicles.motorcycle

Earlier this year, sensor and antenna specialist TE Connectivity 3D printed a working motorcycle, which it unveiled at the Rapid 2015 show in may. 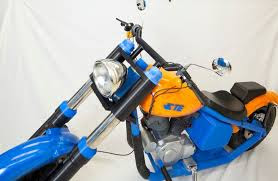 The design, based on the Harley-Davidson Softail bike, took 1,000 hours to build, weighs 250 lbs., and cost roughly $25,000 to construct. It includes a 750-watt, 1hp electric motor (purchased separately).

The frame was created via fused deposition modeling on Stratasys printers using ABS filament and Ultem 9085 resin, while the metal parts were created from bronze using direct laser sintering. The bearings are made of plastic as well, and have held up under rigorous testing. The motor, belt drive, mirrors, tires, battery pack, and kickstand were not printed. READ MORE >>