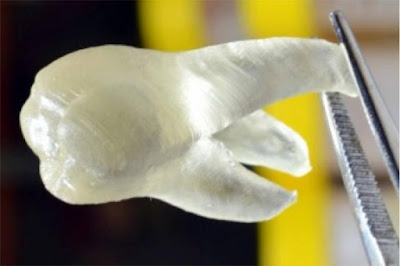 
Scientists from the University of Groningen in the Netherlands have invented a type of 3D printed plastic that can kill 99% of bacteria that touches it, which could pave the way for a multitude of medical, dental, food hygiene and child safety applications.

The researchers took the dental resin polymers that are used to make artificial teeth implants and embedded antimicrobial quaternary ammonium salts inside the polymers. The salts are positively charged, which causes negatively charged bacterial membranes to burst and die.

The polymer was then put into a 3D printer and used to print out a range of dental items, including replacement teeth implants and orthodontic braces, with the objects hardened using ultraviolet light.

When the objects were coated in a mix of saliva and Streptococcus mutans, the bacterium that causes tooth decay, the researchers found that the new material was able to kill over 99% of the bacteria, whereas the dental resin polymer on its own could only kill 1% of bacteria.

Teeth implants are expensive and just like with real teeth, bacteria can cause a great deal of damage to false teeth and infect the gums and teeth around the implants. But this problem could become a thing of the past using antimicrobial plastic.

For now, the material is still being tested, as the experiments only tested the effects of the saliva and bacteria on dental samples coated with the mix over a period of six days, and the researchers have yet to ascertain whether the material is compatible with toothpaste.

However, once the material is conclusively tested, as dental resin is already considered to be safe for humans, the new material could be used in a wide range of non-dental applications – such as for children's toys, to improve food packaging or in water purification.