By STG October 27, 2015
Acclaimed artist and designer Daniel Widrig collaborated with Stratasys to create a futuristic 3D printed art collection. The collection, entitled Descendants, was unveiled at the ‘GLOBALE: Exo-Evolution’ exhibition, at ZKM | Center for Art and Media, Karlsruhe, Germany, on October 30. 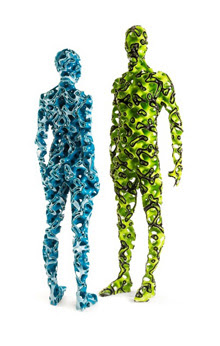 Exploring a futuristic context where technological development and computational capacities continue to spiral, Descendants addresses the increasing possibility of superior artificial intelligence and technological singularity, and how future synthetic bodies might look and feel. “With advanced technologies, such as 3D printing, already facilitating the customization and enhancement of the human form, the concepts of a post-human era of non-biological intelligence is now much more conceivable,” explains Widrig. “It is an inevitable yet exciting design challenge to begin to speculate on how new material bodies might be formed to face the real-world constraints of the future.” 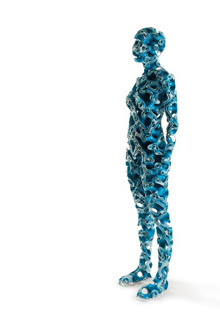 “Having used 3D printing for almost a decade, it is now a natural part of my studio’s workflow, and the intricate geometries of the sculptures simply could not have been produced on this scale in any other way,” continues Widrig. “There was a unique synergy in employing Stratasys’ cutting-edge multi-material 3D printing capabilities and production techniques on a project that focuses on synthetic lifeforms and advanced technologies, which adds a real sense of authenticity and depth to the collection. Working with Stratasys has provided us a great opportunity to design and realize an ambitious project that otherwise would never have been possible.”

“Widrig’s artwork forms part of Stratasys’ 3D printed collection that will be showcased at the ‘GLOBALE: Exo-Evolution’ exhibition, which focuses on the artistic use of the latest technologies and the new realities being shaped by the ongoing technological evolution,” says Naomi Kaempfer, Creative Director, Art Fashion Design, Stratasys. “Descendants is yet another perfect example of Stratasys’ core purpose in revolutionizing the way things are made.”