By STG July 29, 2015
Over 50,000 children in the U.S. and more than 500,000 children worldwide suffer from rare diseases and conditions that prevent them from using their arms. They can’t hug their parents, brush their teeth, feed themselves, or blow bubbles. Magic Arms, a Minnesota-based non-profit, wants to help these children enjoy these simple pleasures – things that many take for granted. Through a web-based fundraising campaign on Indiegogo, Magic Arms hopes to raise money to ensure that possibility and help more than 200 children currently on the waiting list and countless others across the world.

The story began in 2012 with a 3-year-old girl named Emma who couldn’t lift her arms. After meeting Emma and her mom, Whitney Sample and Tariq Rahman, co-inventors of an exoskeleton called the WREX at Nemours Children’s Hospital in Delaware, began to prototype a 3D printed exoskeleton with Stratasys (NASDAQ:SSYS), a leading global provider of 3D printing and additive manufacturing solutions, that gave children with conditions like Brachial Plexus Injury (BPI), Arthrogryposis Multiplex Congenita (AMC), and Spinal Muscular Atrophy (SMA) the ability to move their arms. 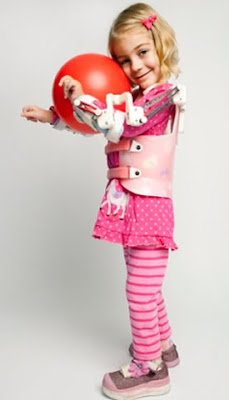 The inventors and their research partners used 3D printing to take assistive technology where it had never been before. 3D printing offered strong but lightweight plastic that could be customized and made quickly. “This is one of those industries that matches perfectly with 3D printing, because we need custom everything,” explains Whitney Sample. It supports and balances the weight of a child’s arms using a 3D printed frame and resistance bands. Precision bearings in all joints of the device allow children to amplify their limited arm strength. As children grow, new parts can be printed or modified to meet each child’s unique needs.

Since 2012, the inventors have fit more than 100 children with 3D printed arm orthotics and worked with the medical community to prove that this is a concept that can scale. The Magic Arms non-profit was founded to take this technology to the next level and train and support hospitals across the world to identify children who will benefit from Magic Arms orthotic and properly fit it to children.

On July 22, 2015 at 11:30 a.m. the non-profit will launch an Indiegogo campaign to fund a complete redesign of its 3D printed exoskeleton. Magic Arms, collaborating with Stratasys, aims to make the device more affordable and functional, and it plans to train five regional hospitals to help children across the U.S. “Every kid deserves to be able to hug their mom and dad,” says Angie Zavoral Conley, Magic Arms’ executive director. “Our Indiegogo campaign is an important step on that path." 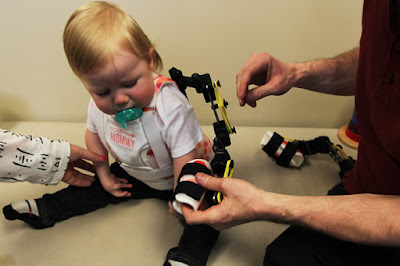 Stratasys has been collaborating with Magic Arms since 2012.  “Shaping lives by revolutionizing the way things are made is part of Stratasys’ core purpose and our corporate social responsibilities. Working with Magic Arms to 3D print orthotics that enable children with muscular disorders to move their arms is the manifestation of our mission and purpose to shape lives,” said Arita Mattsoff, Vice President Public Relations and Responsible for Corporate Social Responsibility at Stratasys.

About Magic Arms
In 2012, Whitney Sample and Tariq Rahman, PhD invented the 3D printed orthotic at Nemours Children’s Hospital in Wilmington, Delaware to help Emma Lavelle, a 3-year-old girl with AMC, use her arms. When the device was taken off to make an adjustment, Emma told her mother, Megan Lavelle, “I want my Magic Arms back!” Magic Arms, a 501(c)(3) non-profit company, was created in fall of 2014 to train and support more hospitals and children who can benefit from this magical, effective, and life-changing technology.

To learn more about Magic Arms, visit MagicArms.org. If you’d like to contribute to the fundraising campaign you can find their page on Indiegogo.com by searching for Magic Arms.