By STG July 14, 2015
“The FDM mould allowed us to get injection moulded parts in days rather than weeks. This is critical in our industry where the next race meet acts as our testing ground and marketing arena. “
Ken Nunn, Southways Consulting

The Project: This High Performance Throttle Body Adaptor is designed for use in high performance vehicles and must be injection moulded in order to fulfil its design requirements. An FDM injection mould allowed several shots to be produced while waiting for the CNC tool.

The Client: VCM Suite Australasia Pty Ltd (www.vcm-suite.com.au) manufacture software systems for the home and professional workshop for use in the high performance tuning of a range of vehicles.

The 3D Printing Process: Tooling and injection moulding has traditionally been a time consuming and expensive exercise; however if you need an injection moulded part in a hurry, FDM can help. FDM moulding is cost effective, fast and completely repeatable. Instead of machining a mould out of Ureol, aluminium or steel, a mould is created with Fused Deposition Modelling (FDM) at technology. 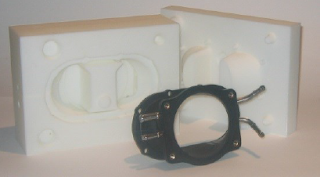 “We built to mould in ABS M30 which was then treated to make it suitable for high pressure plastic injection moulding,” says Simon Bartlett, Engineering Manager Objective3D. “Polyurethane was then injected into the mould with complete success. The FDM ABS-M30 mould was used over 30 times with no loss of quality. If the mould had been built out of Polycarbonate, even more shots would have been resourced from this fast, and inexpensive mould.” 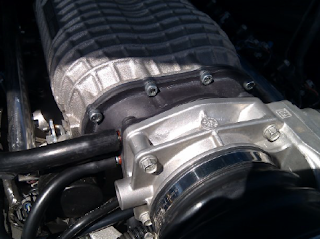 The benefits of this type of tooling could completely revolutionise the prototyping industry, by reducing time to market and tooling costs. See Table for more details.

While further trails are needed to accurately compare the various tooling methods and to test the true limits of this type of FDM mould (in ABS and PC), the projected savings (both time and financial) makes this a process that could save companies thousands of dollars during the Research and Development phase of their project.

“FDM moulding allowed us to dip our toes into the market without the costly spend,: said Greg Brindley, Director, VCM Suite Australasia Pty Ltd. “We discovered that the market was larger than we expected and that the part was accurate and required no modifications. For only a minimal spend, we had parts in days and it gave us the confidence to proceed.”

“The mould produced accurate identical parts which were durable and functional. While the mould may have a limited life, the product it produced is just as good as anything from a CNC injection mould,” said Ken Nunn of Southways Consulting who was commissioned by VCM Suite to oversee the project.

Ray Piper, Director of Beza Patterns added “The FDM mould is cheap and a great way to get to market quicker. FDM moulds certainly have a place in the production schedule.”

YOUR PROJECT | YOUR PARTS | YOUR PARTNER
Whether you need one complex model, ten large prototypes or a thousand production parts.
We print for you.

Talk to Objective3D Parts today and experience our difference. We have customers from all over the world - Contact Simon Barlett at simon@objective3d.com.au or call +613 9785 2333.