By Objective3D and Redeye Australasia June 15, 2012

Not sure of the end use applications of FDM? Read about how durable parts can be in the following article where FDM parts were used on a custom built motorcycle to break the land speed record. 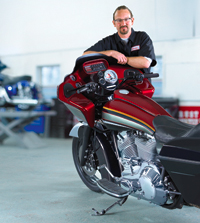 When the Discovery Channel set the task of building a custom bike in 10 days for viewing by die-hard cyclists at the annual Sturgis Motorcycle Rally for their Biker Build-Off, no-one expected that bike to be able to break the AMA Land speed record.

Klock Werks Kustom Cycles, South Dakota, took on the Biker Build off challenge and won with 'Best bike at the show'. They followed up their win by setting an AMA Land Speed Record (147 mph) at the Bonneville salt flats.

“Direct Digital Manufacturing gave us a major edge in the competition,” says Jesse Hanssen, Klock Werks mechanical engineer. With only a five-day filming schedule, one-of-a-kind components with complex geometries and strict functional requirements were created with direct digital manufacturing using polycarbonate. “FDM enabled us to build anything we could imagine. FDM put no limits on our imagination,” says Hanssen.

“Many of the parts on this bike could not have been produced by any other method in the time-frame required. FDM saved us a considerable amount of money and made a major contribution to our winning the Biker Build-Off,” says Klock Werks partner Todd Snedeker. 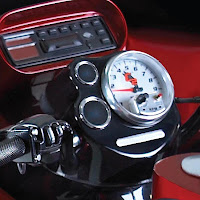 In building a custom bike for the competition, Klock Werks called upon their own line of bagger parts, purchased some components, and others were one-of-a-kind creations that could not be purchased off the shelf. Most of these unique parts had complex geometries and many also needed to also meet strict functional requirements such as a gauge pod which had to withstand cyclical vibrations without breaking.

“Normally, these parts would be produced from injection molded plastic or machined aluminum,” says Hanssen. “But it takes three to four weeks to build parts using either of these methods because they require tooling. Klock Werks had to fabricate all of the components during a five-day filming segment.” In addition, the cost of building the parts needed for the competition would have been between $15,000 and $20,000, which would have been far too expensive.

Klock Werks engineers designed the gauge pod, fork tube covers, headlight bezel, floorboard mounts, floorboard undercovers, and wheel spacer cover in SolidWorks. “FDM put no limits on our imagination,” says Hanssen. “We built all of these parts in a quarter of the cost to injection mold or cast them."


"The finished parts met all of our requirements for both geometric accuracy and mechanical strength," says Klock Werks partner Todd Snedeker. "The ability to produce fully functional parts using direct digital manufacturing methods was instrumental to our success. Many of the parts on this bike could not have been produced by any other method in the time-frame required. FDM saved us a considerable amount of money and made a major contribution to our winning the Biker Build-Off at Sturgis Week."

After winning the competition, the Klock Werks team raced the bike at the Bonneville salt flats, where they set an AMA Land Speed Record. "The WFB (World’s Fastest Bagger) proves the durability of FDM polycarbonate parts at 147 mph.," says partner Brian Klock.