By Objective3D and Redeye Australasia August 03, 2010
Working with VicRoads to produce large scale models of proposed road systems highlighted the importance of hand finishing, an eye for detail and discussing the clients needs and wants with the team at RapidPro. 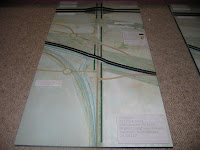 THE PROTOTYPE/PROJECT: VicRoads recently requested several 3D models of a proposed modification to the Western Highway between Ballarat and Burrumbeet in Victoria.

VicRoads requested 4 models to be built showcasing the 4 proposals for the new road system.

While Vic Roads originally requested the entire project to built in plaster/epoxy, the team at RapidPro suggested combining several techniques to produce the same result, but at a fraction of the price.

THE RESULT: These Proposals were subsequntly printed using several Rapid Prototyping techniques including Objet printing. The models were then hand finished to highlight specific areas and items of importance.

The finished proposals measured almost 900 x 400 mm and were built in over 50 pieces including the individual trees, road signs, bridges and roads. These were then assembled and fixed to a backing board.

Talk to RapidPro about your next prototyping project - we are here to advise you on the best processes to suit your needs and budget.