By STG January 18, 2016
The world's leading 3D Printing Solutions Company, Stratasys, has again recognized Objective3D with the 2015 Award for excellence in customer satisfaction. This year’s award is Objective3D's second for this catergory, the first was in 2013. 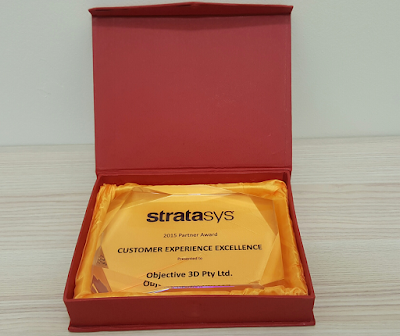 This exciting news follows from Objective3D's recent success in its ISO 9001 certification in mid December 2015 and is a further testament of Objective3D's continued commitment to providing not only the best 3D Printer solutions in the market but also the reliable customer support that its valued customers can count on.

“Customer satisfaction is the result of great teamwork,” said Matt Minio, Managing Director of Objective3D. “The Stratasys Customer Satisfaction Award is a great honor for Objective3D and we share this recognition with all our staff and thank them for their diligence in keeping our customers consistently satisfied. We would also like to thank all our customers who's taken the time and effort to complete the survey and made the recognition possible for us.”

Objective3D is Australia and New Zealand’s leading provider of Stratasys and Makerbot 3D Printer Solutions for designers, educators and manufacturers. We are the only Stratasys reseller in Australia and New Zealand that provides both 3D Printer Solutions and 3D Printing Bureau Service through a state-of-the-art Additive Manufacturing Centre which houses the largest range of FDM and PolyJet Machines including consumables and spare parts. Objective3D is an ISO 9001 compliant company and has won the Stratasys Customer Satisfaction and Support Award in 2013 and 2015 for the Asia Pacific region.