3D Printed gun on trial on The Good Wife

By Objective3D and Redeye Australasia March 19, 2015 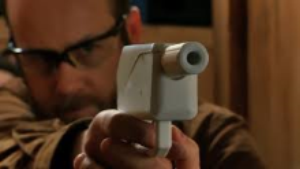 The Good Wife last night showcased the many intricacies of the 3D Printed gun debate.

The scenario: Someone downloads the plans for a 3D Printed gun. He then slightly modifies the files and prints them at home on his hobby 3D Printer.The 3D Printer does not build at the best resolution so there are printer flaws. He takes the gun to a shooting range, loads it with live ammunition and fires. The gun backfires and lodges a bullet into the spine into a neighbouring shooter at the shooting range.

According to The Good Wife, it was the designer first, then the printing company, then the person who built and fired the 3D Printed gun. Why not the firing range for having wooden partitions instead of bullet-proof metal?

This episode posed many interesting questions, and thankfully, in Australia, making a gun without an armorers license is illegal, which includes 3D Printed guns.