By Objective3D and Redeye Australasia December 06, 2011
vW Maps and RapidPro have produced an accurate, detailed three-dimensional model of the Beechworth wine region. Made with 3D printing technology, the model maps the locations of vineyards, the official wine region, the roads, rivers and wooded areas. The topographically-accurate base shows the rolling hills that help distinguish the region’s wines.


Cartographer Martin von Wyss of vW Maps said the geography of the wine region comes alive in this format. 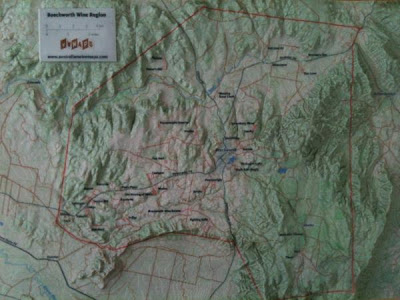 “Seeing and touching the landforms makes it easy to understand how wind, rain, and temperatures affect the grapes. Clearly the qualities of the wines differ thanks, in part, to the varied topography. The road rises as you head eastward, up into Beechworth, and undulates from Mount Pilot in the north through Beechworth and up to Mount Stanley in the south.”

The full-colour terrain model was printed by specialists RapidPro of Mornington, Victoria, using additive manufacturing technology, also known as rapid prototyping or 3D printing. The Engineering Manager of RapidPro, Simon Bartlett, said that “the high resolution now possible in 3D from these machines makes for a stunning and informative 3D map. We’re only beginning to realise how many industries, such as cartography, can benefit from this technology.”
RapidPro is an Australian-based rapid manufacturing bureau specialising in prototypes and parts for form, fit and function. RapidPro manufactures from 3D computer-aided design files to produce accurate, repeatable and functional prototypes and tools.