By Objective3D and Redeye Australasia March 31, 2011
With our proud history of automotive prototyping and expertise in automotive engineering, it was wonderful to be invited to the FI Grand Prix to watch Brad Jones Racing and Team BOC compete in the V8 Supercars .
Brad Jones Racing

Brothers Brad and Kim Jones have tasted success with their own team in just about every category they have raced in. Whether it was AUSCAR, NASCAR, production cars or two-litre Super Tourers, the Jones brothers from Albury know what it takes to be successful. BJR moved into V8 Supercar racing in 2000. It grew to a two-car team in 2002 with the signing of John Bowe and made one of its biggest ever switches for 2008, moving from Ford to Holden with a pair of ex-HRT Commodores.
Team BOC results at Albert Park 2011 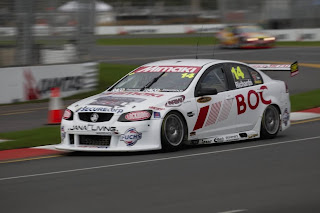 Broken drive pegs on Jason Richards' Team BOC car denied everyone a fairytale ending at Albert Park on the weekend, eventhough the team had finished second the previous day and looked set to go one better on the final day. But while Richards retired on lap five, team-mate Jason Bright finished 10th overall after damaging a front tyre trying to pass Will Davison and limping home with a respectable finish. Richards, who is suffering from a rare form of cancer, will now focus full-time on his recovery and Jason Bargwanna will return to Team BOC for the Hamilton 400 in three weeks' time.
Driver's Quotes:
Jason Bright (#8 Team BOC Commodore VE II – 10th)

"I went to go down the inside of Will Davison; he'd left enough room but as soon as we got on the brakes he shut the door. I was already committed so had to mash the brake pedal pretty hard to avoid a pile up. It destroyed my right-front tyre. There'll be a flat spot on it like never before.
“I considered pitting but it held in for a lap so I thought I would hold onto the pack in front but ended up more competitive than I thought. Having said that, it certainly wasn't as strong as what we've come to expect after Abu Dhabi and Adelaide.”
Jason Richards (#14 Team BOC Commodore VE II – DNF)

“It would have been beautiful to stand on the podium, and I had a very real chance today, but the way the race unfolded with the safety car early on went against our strategy.
"I'm disappointed in a micro way. Spearing off at Turn One was not ideal but I got out of the weekend what I came here to get; I got more out of it. I got the energy that I wanted and my fan base is growing from all the supporters here this weekend. It's broken down all the barriers between Ford and Holden and I have to thank everyone for their support. It's been unreal.
"I've had a fantastic weekend; it's been amazing."
RapidPro would like to thanks Andrew Campbell, Brad Jones Racing and Team BOC for taking the time out to show us around Pit Lane and allowing us to share in the incredible experience of V8 Supercar racing at it's best.