By Objective3D and Redeye Australasia September 07, 2010
Creating a museum model of a lifelike crocodile involves a great deal of skill and the request from reknown exhibition preparator, taxidermist and model maker Ewin Wood, required a lot more ingenuity than most. 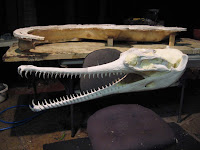 Ewin already had a skull of the Gharial crocodile; however, it was too large for the intended display case. He needed the skull to be scaled down and accurately reproduced so that they could replicate a body that would allow the entire specimen to be displayed in a three meter long glass case.

Exhibitions of this caliber are prized for their accuracy and authenticity, so it was paramount that every detail be exact, even in a smaller reproduction specimen. 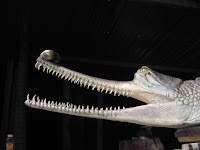 RapidPro was employed to recreate the Gharial skull. For this to be as accurate as possible, RapidPro contacted ScanXpress who were able to create detailed CAD files by scanning the actual crocodile skull.

The CAD files were then passed on to RapidPro for scaling and building. Once the skull was resized to accommodate the display case requirements, the skull model was built from plaster/epoxy for ease of finishing and authenticity. The skull was then sent to Ewin Wood for finishing. 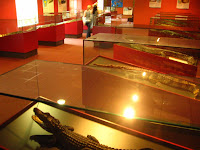 The result is a lifelike model of the Gharial crocodile, currently on display at Crocosaurus Cove, Darwin as part of The World of Crocodile Exhibit.